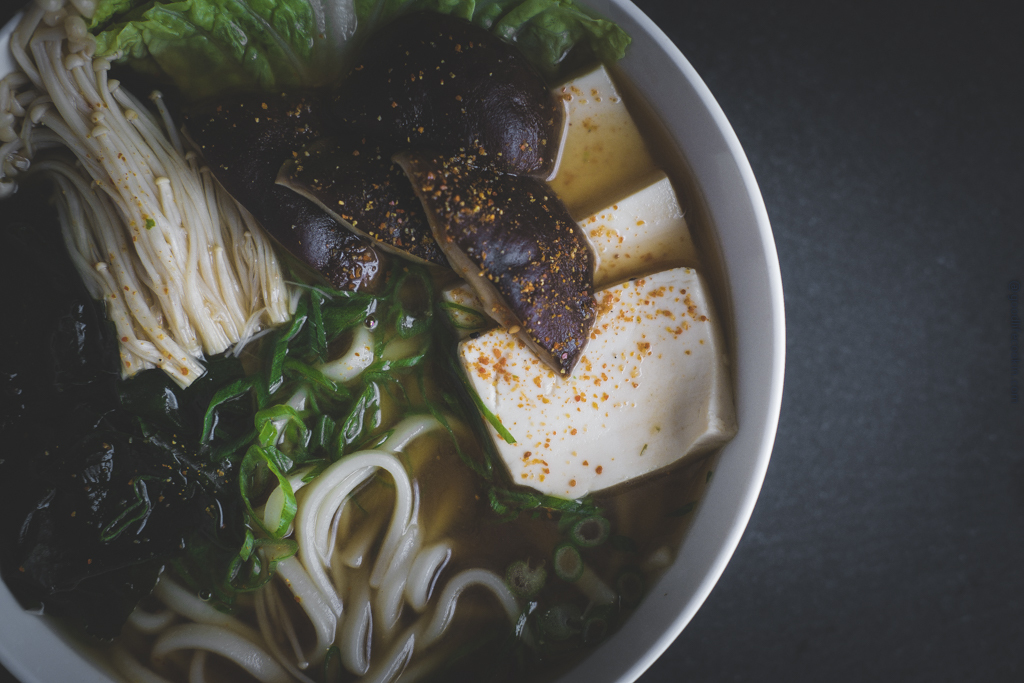 You know what makes anything cool as shit? Adding the word, “Japanese,” to it.  Seriously! Take something super ordinary like, “ice water,” and add instead say, “Japanese ice water.” You’d be like, WTF is that?! Sounds crazy right? I believe the reason why is because Japanese culture is so traditional and seemingly beautiful. There’s so much romance and wonderment we all have in how Zen-like, the culture really is.   Aside from that, I think that Japanese cuisine is something perfected. I can admit that I’m no where near perfection in anything I do, but thinking about making a bowl of Japanese udon vegetable soup noodles 1000’s of times, until I get it absolutely perfect, is maybe a calling of mine that I will need to explore later in life.

Until then, I’ve taken a stab at creating a rich and hearty udon broth that always nourishes my soul.  Japanese Udon broth is traditionally made with bonito and kombu, so to veganize this, we’ll take the smokiness from dried shiitake mushrooms and use them as the base of our broth.

To bring the taste of the ocean into our broth, we’ll have to use seaweed. I used a combination of kombu and wakame to also give a little more mineral taste to the broth. I know it sounds strange, but it’s just a flavor I believe is important.

We’ll want to prepare the vegetables to go into this broth as well. The combination of Leek, ginger, and onions will lend a fragrant hand and give the broth a ton of body.

As a quick note on the green onions, for the broth, we’ll only use the stem portion from two stalks.  We’ll save the top portion for cutting small and garnishing the dish later.  I’ve chopped a 3rd green onion stalk into half inch pieces for use in cooking our fresh shiitake mushroom topping.  We’ll throw in all of the veggies to caramelize in coconut oil. If you like a darker broth, you’ll want to caramelize for a longer time.  I do a light caramelization here because I feel that udon broth should be kept light. When making a miso ramen however, you’ll want to go super heavy on the charring.

Once everything is nicely charred, we’ll add the dry shiitakes with dried seaweed into the pot, along with the water and bring to a boil. I added just a touch of miso paste as well, to give a bit of umami and salt to the broth.

All we’ll need to do is simmer now, with lid on, for about 1 hour. The exciting part about making any vegetable broth is that you don’t have to wait too long to get an amazing finish on the broth.

What we’re looking for is a nice golden broth and you’ll know it’s done when it taste clean and flavorful. You can take some sea salt and throw it into the broth if you’d like to add more salt at this stage, but keep in mind that we’ll also be adding salt from the Tamari mushroom broth soon too so hold onto your salt palate for a second! Strain all the veggies and dried mushrooms out of the broth and keep on a super low heat with the lid on.

While we wait for the broth to rest, we’ll prepare our toppings by soaking some wakame seaweed in 1 cup of water, and rinsing our mushrooms to let dry.

For our toppings of fresh mushrooms, we’ll be using some enoki on the side, and some shiitake mushroom that’s been simmered in a Tamari based liquid.

Taking the green onion that we chopped into 1/2 inch pieces earlier, we’ll combine that with the Tamari, Mirin, and water to simmer our fresh shiitakes in a small saucepan, giving them mad flavor when we use them to top our udon.

The craziest part about this is actually not the mushrooms, but the liquid it produces for the broth. We’ll want to strain and save this liquid, which should yield about a full cup after you’ve simmered the mushrooms for about 25 minutes with the lid off.

Please do taste this liquid because it should have a salt snap to it that you’ll love, as we add it into our broth for the ultimate flavor enhancer.

And now, the udon. Udon is so versatile because you can use it with anything. Hell, I might even try it in a tomato sauce one day. I stock dry Japanese udon because I love the gauge of it, you can make sure the texture is right when you boil it, and it’s convenient to store. While you could buy udon at any grocery store that’s already semi cooked and a little wider gauged, I tend to think those aren’t as special and somewhat, commercialized.

As I boil the noodles for 9 minutes, I’m also quickly dunking my enoki mushrooms, slices of soft tofu, and napa cabbage into the water for a minute to bring to a hot temperature. Now, we’re ready to plate and serve! I like to plate the noodles down first, add all the toppings and then put the broth in at the last second so everything is piping hot. You’ll want to bring the broth back to a boil at this point and drop in a tbsp of Tamari and 1/2 tbsp of Mirin so everything is served just right.

totally forgot to add the shiso leaves as garnish in the photo, but if you can find shiso leaves, they make a great addition to the broth. Garnish with Japanese Shichimi Pepper and green onions, and BOOM, you’re ready to grub down. Hope you enjoy!

Please feel free to leave comments below and let me know if there are any improvements you make along the way! Would love to know how this worked out for you.