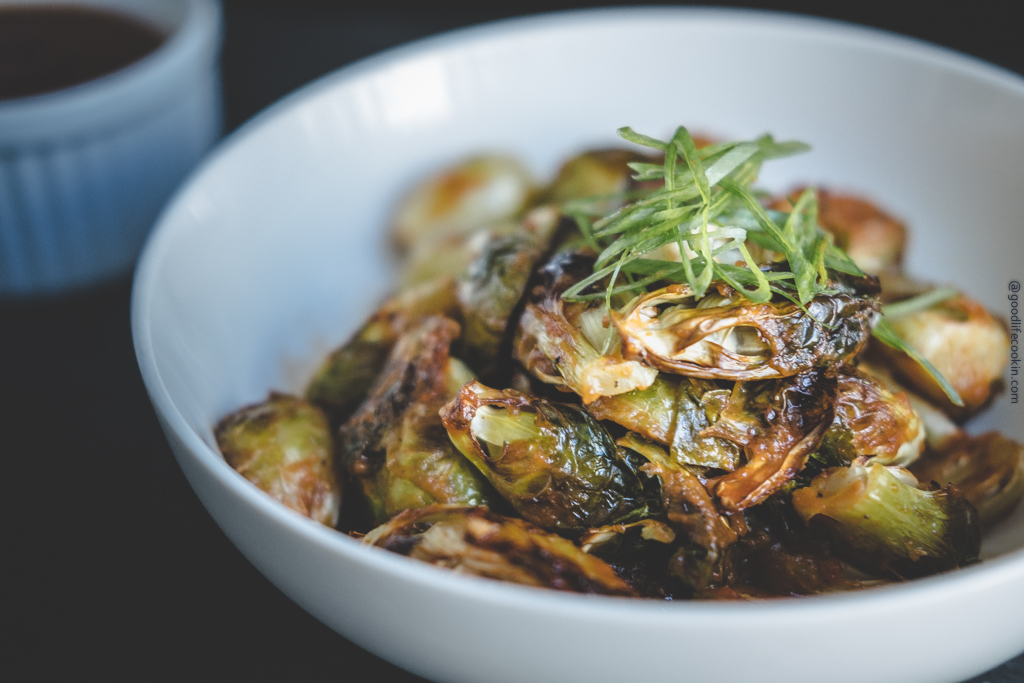 There’s definitely something super special about homemade sauces. I typically shy away from homemade stuff, but recently I purchased a bbq sauce that was just a little too sweet for my liking and in a bind for a sauce I really liked, I decided to just make my own. I knew I wanted a sauce that was a little more savory and had a vinegar kick, but not too much. My basis was to use this sauce and make BBQ Brussels Sprouts, which I’ve quickly become addicted to making.

So first, we have the bbq sauce. I’ve seen some very complex bbq sauces out there and what I was searching for was simplicity and 100% plant based, of course. So, I quickly scrambled around my kitchen searching for some ingredients and I believe this sauce recipe turned out to be a stellar fit for my BBQ Brussel Sprouts.

I also thought about what was in season, and I get a pretty general understanding of that, from what my mystery box of produce has, upon delivery from Imperfect Produce.  If you haven’t checked out Imperfect Produce yet, I’d highly encourage it! They send out all the ugly produce to your door step at a fairly reasonable rate, and best of all you’re helping to consume unwanted food that’s produced simply because it’s ugly…and it’s never really that ugly!

In my box this weekend, they packed some fresh apricot, so I thought this would be great to add the sweetness and texture to my bbq sauce. For the base of the sauce, I used diced tomatoes, Tamari, Marmite and apple cider vinegar.

The cool part about this, was I just dumped it all in my blender and it was good to go! Well, almost…

It was pretty awesome to taste test the sauce right out of the blender because it felt 90% of the way there and that’s not bad at all for not even touching the stove yet. But I knew there needed to be that umph in the sauce and I’m not talking about just seasoning, but I’m talking about garlic!

So, we’ll add some garlic to a sauce pan heating it until fragrant.

Then dump in the bbq sauce straight from the blender and let it reduce down about 30%.  The final component is dropping a touch of liquid smoke in at the end to finish it off and what you’re left with is a simple, fantastic, bbq sauce that’s ready for coating the BBQ Brussels Sprouts.

Next up, the Brussels Sprouts! I gave them a quick dice in half, peeled off the outer layer which sometimes I will save for deep fried Brussels Sprout chips.

Once they’re cut, we’ll just toss them into a mixing bowl and coat them with olive oil and salt. I like to be generous with the oil here to really make sure every inch of the sprouts are coated.

We’ll spread them out onto a pan and prep the oven to about 400 degrees for about 20 minutes. The char on them is super easy to get when you roast them and I just love the oven for convenience.

Once they are out of the oven, we’ll just flip them in a pan over medium heat and lay down the BBQ Sauce! For the bbq sauce, you can use as much or as little as your heart desires.

You may even want to just dip them and have the sauce on the side!

Either way, this dish is something that is super simple to make and can really shine as an entree and/or a side. If you have some leftover bbq sauce, save it for some bbq pulled jackfruit sandwiches.  And if you haven’t made those yet, stay-tuned for my version soon!

Print Recipe
BBQ Brussels Sprouts
Nothing beats a simple meal with everything made from scratch. Oven roasted Brussels Sprouts, slathered in BBQ make for a perfect entree.