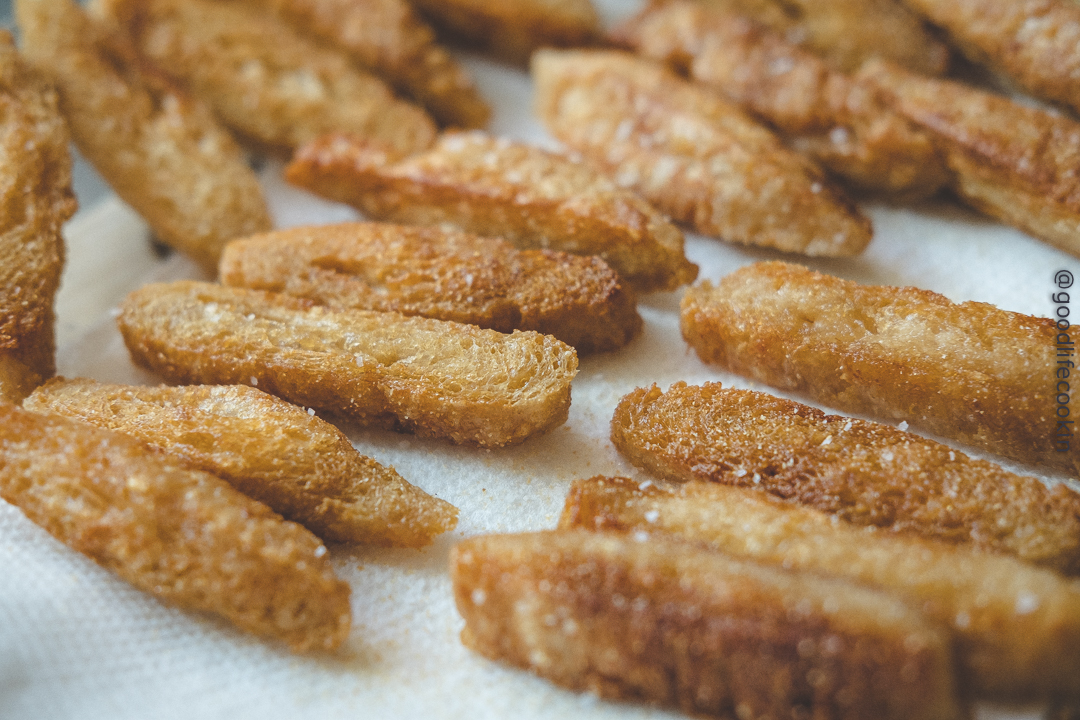 I’ve seen a lot of ways you can do a Vegan chicharron, including frying tofu, tofu skin, mushrooms, coconut…etc. All of which are SUPER tasty, however, they would never have the knockout punch to convince a non-Vegan to go Vegan…until now.  I mean, if your only concern is missing out on crispy pork, then look no further because it does exist in the Vegan world. And believe me, this is coming from someone who was majorly addicted to roast pork. I’d scour all of Chinatown to find the best roast pork. I’d buy bags of pork rinds at the store every week because I just loved the flavor and texture. So, hear me when I say, this is the BEST way to make Vegan Chicharrones, and it’s super easy. And, dear uncle, you’ll be going Vegan soon enough!

There’s a company Verisoy that makes these Vegan Soy Chops. They are dehydrated and can be found at Asian Grocery stores. If you can’t find this at your store, email me and I’ll try to send you some.

First step is to get this soaked in water for about 1 hour. Once they are soaked, you’ll squeeze out the liquid and let them air dry for about 10 minutes.

At first feel, they will be kind of spongy and a little strange, but once they hit the fryer, you’ll be in Vegan heaven. Start by cutting against the grain to get the best bite out of them. We’ll make strips like this –

Once you’ve got them all cut, we’ll just dust them with a tbsp of flour. You don’t need a ton of flour on this as the soy itself will fry up real nice.

The next ingredient is super critical! If you’ve read through my other posts, you know I love using Golden Mountain Seasoning Sauce. If you don’t have a bottle of this stuff, go out and get it because it packs a punch of umami in everything you do.

Pour a few drops and give everything a good stir. We’ll let that marinate for just 10 minutes. In the meantime, let’s heat up a pan of oil for shallow frying the chicharron. 4-6 tbsp will be good to start with, but if you’re doing a large batch of this, just keep an eye on the oil level and add oil as you go.

Having patience with shallow frying this stuff is key. You’ll want to make sure to fry it until it’s a nice  golden brown. This should be around 3-4 minutes per side.

Once you’ve got the perfect color on both sides, you’ll notice the inside is still a touch tender or white in color. This is completely your preference, but I like to keep it a little tender inside. If you’re the type that wants it crispy throughout, then just sear all sides to make sure it’s completely fried.

The final step here, is to place each piece on a paper towel and while they are still hot, sprinkle just a touch of salt and garlic powder on each piece. This will of course make your chicharrones pop with flavor.

I’m not sure how you like to eat your chicharrones, but I just go all in and eat them like chips. You could put these into anything you’d like as toppings. Pop them into Tacos if you want or even dip them in a lime Sriracha sauce. Quite possibly the most addictive thing I’ve made in the past 2 years I’ve been Vegan.

Hope you guys enjoy this and please help leave comments below if you have any questions!