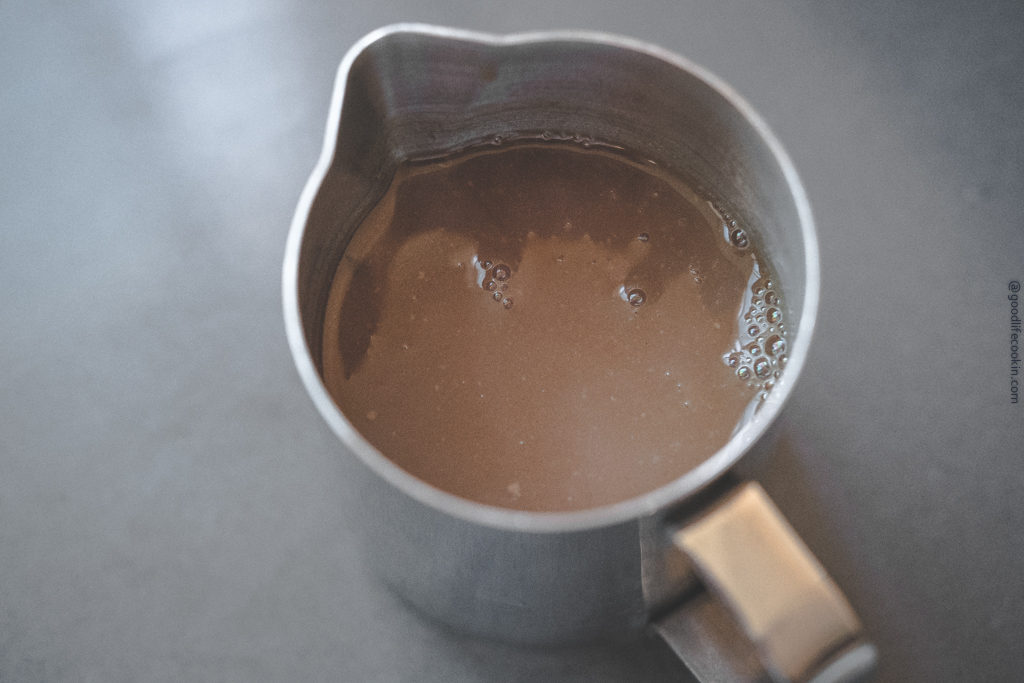 Who isn’t obsessed with gravy? It’s that pour over sauce that will have you stuffing you face with obscene amounts of mashed potatoes. It’s that rich, decadent flavor that brings you home for the holidays, and while we would only believe this type of gravy is made with traditional poultry drippings and roasted vegetables, we can reimagine it right here with 100% plant based ingredients.

So, what’s the trick with getting a rich Vegan gravy? It’s actually not that complicated. We just need some good quality porcini mushrooms, and some charred vegetables!  Charred vegetables will give a ton of color and flavor to any type of broth and the mushrooms will lend a hand to provide meaty, earthy, nuances to the gravy.

Let’s start by scaling out 10g of porcini mushrooms. This will give us enough gravy for around 4 servings, depending on how much gravy you love!  Next up, we’ll cut all of the veggies and prepare them for charring up in a small gravy pot.

For the herbs, I just used a simple flat leaf parsley with the stems. It’s important to keep the stems for this broth because they lend a bitterness that helps to balance the gravy.

Place down the onions, leeks, and carrots in a pot over medium heat and let them really char up. We don’t want to burn all the pieces, but we do want some really deep color on them. Burning a few pieces here and there never hurt anyone either! Constantly stirring and being very attentive to them is key in this step.

Once they are charred nicely, we’ll throw in the porcini mushrooms and give that a quick stir. You’ll notice the aromas fill the air immediately as the porcini’s have such a rich character to them. Pouring in the water, you’ll also see how the broth turns color immediately!

Throw in the parsley and turn the heat up to high to get this pot to a rolling boil. While we wait for the boil, we’ll also add in our miso paste for umami, our soy for a touch of salt and coloring, and our balsamic vinegar for some acidity.

After the broth is boiling, give everything a good stir, then reduce down to a low flame to simmer for about 30 minutes. I like to keep the lid halfway on, so you can really get that deep simmer allowing time for a slow reduction.

After 30 minutes, you should have a really tasty broth. I like to add a touch of salt to this step, but this will be totally your preference. You’ll actually notice that the miso paste lends a good amount of salt to the broth already, so it may just be fine the way it is!

As we strain our veggies out, we should have about 2 cups of great tasting broth. Once strained, we’ll throw the liquid back in the pot and keep a low simmer going with the lid off for FULL reduction.

To thicken the gravy, we’ll prepare a quick roux consisting of flour and Vegan butter. If you’ve read my other posts, you know I just love Miyoko’s brand of butter. There’s no palm oil and it’s super creamy.

A roux is pretty basic. Just take a tbsp of butter and two tbsp of flour, mix it together in a saucepan over low heat until the flour cooks for about 2 minutes tops! Finally, we’ll add the roux with some cracked pepper, into the gravy broth and reduce down for another 15 minutes. It may feel like a long process, but it will be totally worth it.

What you should end up with is a nice thick consistency once the roux has cooked into that rich gravy broth. You can test for the consistency with a tasting spoon. If it’s still a little watery, just let it reduce down for another 5 minutes or so.

That’s it! You’re ready for a heavy pour over of some rich Vegan gravy! Hope you enjoy!

Print Recipe
Rich Vegan Gravy
A rich vegan gravy useful for pouring over mashed potatoes or anything that comforts you.
Ingredients
Instructions