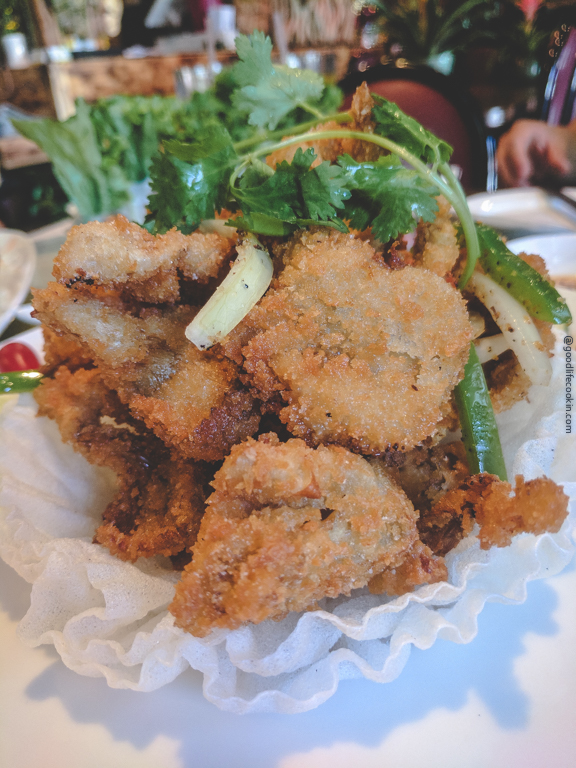 I was recommended to try Golden Bamboo from my uncle who claimed this spot was a 5 star restaurant pushing itself close to being Michelin rated. I thought, “Michelin rated? A Vegan restaurant?” Oh man, maybe in my wildest dreams, would I get to find a plant based restaurant of that caliber in the San Francisco Bay Area! Don’t get me wrong, there are a ton of great tasty spots out here in the Bay, but finding Golden Bamboo was something that pushed the limits of what cooking plant based truly means.

And dear Uncle, you surely did NOT disappoint! Golden Bamboo was by far the the top Vegan restaurant I’ve been to. Not only that, but its offering of classic Vietnamese flavors packed into plant based dishes blew my mind! I don’t get to eat a lot of Vietnamese food as much as I used to, only because the cuisine is a little heavy on the meats and fish sauce, so it was absolutely refreshing to find this place.

I started out with one of the most amazing thai iced teas I’ve ever had. Typically, these drinks are hyper sweet, and lack luster in texture. Golden Bamboo was able to offer a smooth, creamy, richer version that I downed in about 4 minutes!

For appetizers, we didn’t hold back! While I wanted to order everything on the app menu, I chose to try the deep fried oyster mushrooms, mustard leaf wraps, and pork spring rolls. Simply put, they were all mind blowing. The crispiness of the oyster mushrooms was perfect! The mustard leaf wraps had so much freshness and flavor to them paired with a peanut dipping sauce, and the spring rolls reminded me of the infamous Brodard Restaurant’s nem nuong…BUT VEGAN!!! YESSS!!

Next up, the carbs! You can’t get Vietnamese food without getting your Pho on! The Pho was spectacular. The broth was super fragrant and perfectly balanced. All the toppings were spot on too! We also tried their Bun hue, which is a lemongrass based soup noodle dish, which I thought was good too, but not as good as the Pho. I think that if you want to get a classic Bun Hue in San Jose, it will still have to be at Tofoo Com Chay!

We also tried their salty fish fried rice, which is a classic Cantonese dish to me that I just hadn’t had in forever.  You can get this dish at other Vegan Chinese Restaurants in the city, but I believe Golden Bamboo had the best version of it. There was just so much umami and fish flavor in it, I couldn’t believe it was Vegan!

To finish off the dinner, Thomas, one of the owners, recommended I order the shaken beef (Bo Luc Lac). Shaken beef is one of those classic Vietnamese dishes that if done right, can make you a celebrity chef! Just as it did with Charle’s Phan of Slanted Door in San Francisco.

Well, the verdict here, is that this was one of the best shaken beef dishes I’ve had and I believe it can compete with actual meat. YESsSSSsssSSS! Biting into dishes like this makes me almost want to cry… simply because of how much I miss enjoying this dish with my family and friends. I guess that’s how you know this restaurant speaks the TRUTH….you cry a little bit.

For the night cap, we topped it off with a mango sticky rice dessert which definitely hit the spot. It wasn’t as good as paying $1.00 for a whole plate in Thailand, but I don’t think that’s apples to apples.

Overall, this place was fantastic. Selfishly, I wish they were a little more local to San Francisco, but rumor has it, they will be opening up a “To-Go” concept in the city soon (crossing my fingers)! Worth the 45 minute drive to San Jose from San Francisco? Hell Yes.