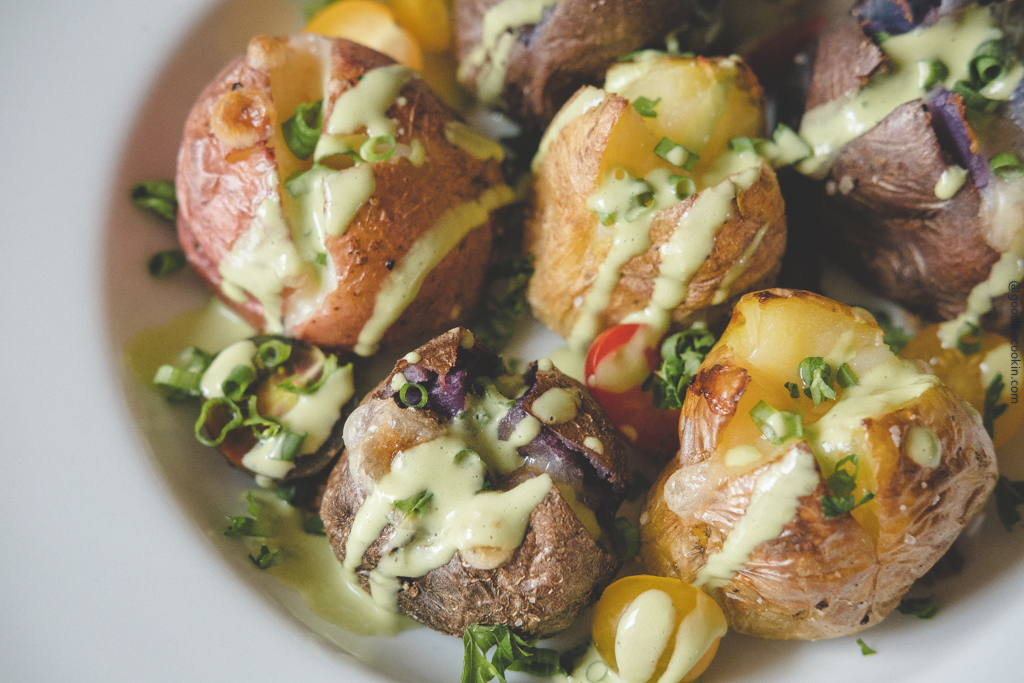 Cheesy Potato Poppers are the easiest thing to make and are the perfect thing to serve to guest as an appetizer.  You stick potatoes in an oven, put cheese on them, and finish them off in the oven. It doesn’t get much simpler than that! If there was one survival skill to teach someone, it would be learning how to make potatoes. Why? Because they are just too damn versatile and filling to not know what to do with them!

There’s a mozzarella shred pack at Trader Joe’s which I’m also testing out for the first time. We’ll use this cheese on our potato poppers here. The cheese itself is a little flat right out of the bag, but that didn’t stop me from trying to make the best out of it.

I’ve tried several brands of Vegan cheese and I believe that Daiya brand still holds the top spot for me, however this Trader Joe’s cheese has slowly worked its way up the list for a couple of reasons which I’ll briefly talk about.

On the bag, it reads, “Do not microwave,” and I found that odd, because when something says, “don’t do it,” I typically will do it. What I found was that the cheese melted perfectly in under 20 seconds. The melt was actually better than Daiya brand cheese! Secondly, the weird cheese flavor that hits your nose when it comes out the bag mellows out and becomes a pretty accurate flavor to that of dairy cheese.

Jumping back to the potato poppers, we’ll simply place in the oven for about 18-20 minutes at 375 degrees. To prep the potatoes, just rub them with some olive oil and give them a generous pinch of salt and pepper and that’s it!

When the potatoes are soft, we’ll go ahead and slit a cross on the top so we can squeeze the potato slightly out. You’ll want to just grab them from the bottom and push up with both hands to get them to flair out.

We’ll put the cheese in the poppers and place them back in the oven for about 3-4 more minutes, or until the cheese melts. When cooking the Trader Joe’s cheese in the oven, it will be important to not over melt them because they will tend to dry out.

For toppings, I just halved some cherry tomatoes, chopped green onion, and some flat leaf parsley. To finish everything off, we’ll use the Creamy Basil Green Dressing and there you have it!  Potato Poppers – The easiest way to kick off a football game or new episode of Game Of Thrones!